> About Us < Our History 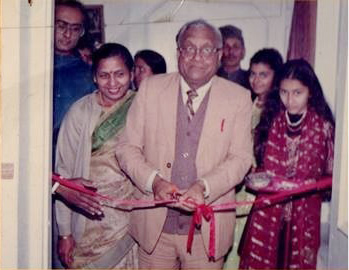 Dr. S.R. Gupta, Civil Surgeon, Hoshiarpur was the Chief Guest. He spoke of his long association with Ms. Anita Lawrence (the founder and present Principal) and how she had taught his daughter to speak, read and write correct English over 25 years ago. He wished THE TRINITY FAMILY well and expressed his desire to see The Trinity School fulfil the aspirations of the people of Hoshiarpur.

The Guest of Honour explained how Trinity is a universal symbol. To the Christians, it is the Father, the Son and the Holy Spirit, to the Hindus: Brahma, Vishnu and Mahesh while for the rest of the people it could be perceived as God. the Prophet and the Disciple thus symbolizing unity among all. This also shows the unique character of the school which aims at respecting all and moving towards the aim of Truth and Enlightenment through knowledge and experiment using an open and broad minded approach.

Initially, The Trinity School functioned as a small nursery school in a residential building in the small town of Hoshiarpur but was later moved to a more spacious building within the town to accommodate the growing number of students. As the school's reputation grew and Trinity was increasingly recognized as the best nursery school in the district, parents insisted that their children continue in Trinity and a decision was taken, in the year 2003, to add one class every year to eventually make it a High School. The Trinity Educational Society was formed and it was decided that Trinity would follow the ICSE pattern and seek affiliation to the Council at an appropriate time. Consequently, the School's society was registered as a non-profit making body that very year and the school got affiliated to the CISCE, New Delhi in 2012.